(Interfaith America) — On the eve of the 10-year anniversary of the fatal mass shooting at the Sikh Temple of Wisconsin, more than 100 interfaith leaders, policymakers, White House officials, law enforcement officials and educators convened Thursday night (Aug. 4) at city hall in Oak Creek, Wisconsin, for an interfaith panel discussion on protecting places of worship from hate crimes.

The panel was a part of the Healing from Hate & Protecting Places of Worship Forum, a memorial of the tragedy at the gurdwara (as Sikhs call their houses of worship) organized by the Interfaith Conference of Greater Milwaukee in partnership with the Sikh Temple of Wisconsin, Sikh Coalition and Sikh American Legal Defense and Education Fund.

The forum was a part of a series of events these groups are hosting this week to honor the victims of the shooting: Sita Singh, 41; Ranjit Singh, 49; Prakash Singh, 39; Paramjit Kaur, 41; Suveg Singh Khattra, 84; Satwant Singh Kaleka, 65; and Baba Punjab Singh, 72.

“Being here is incredibly moving because people have turned their pain into purpose in a way that none of us could have predicted,” Melissa Rogers, executive director of the White House Office of Faith-Based and Neighborhood Partnerships, said after the forum. 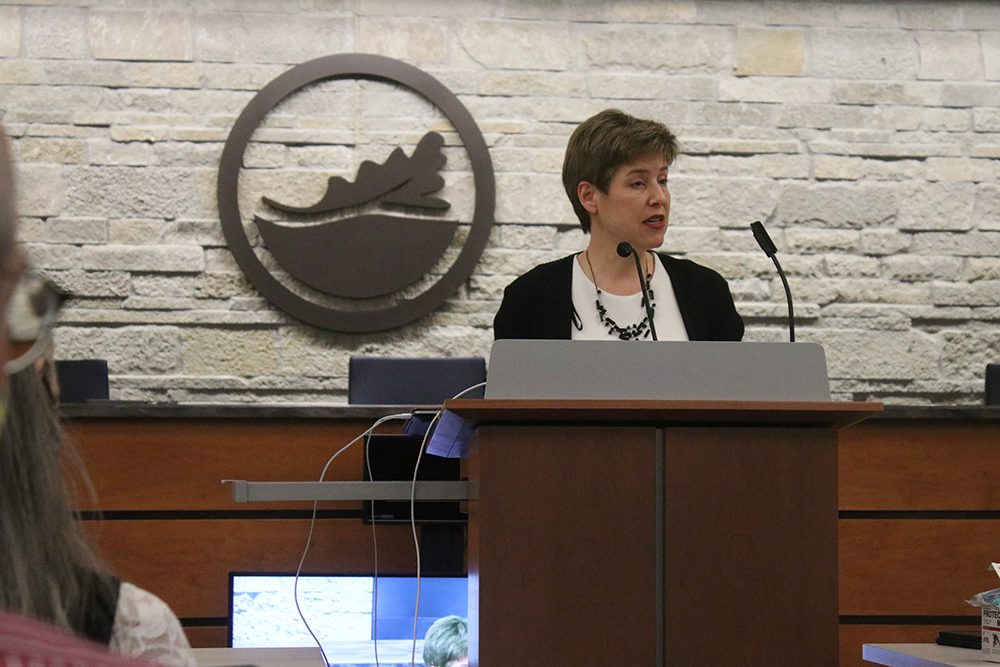 Melissa Rogers, executive director of the White House Office of Faith-Based and Neighborhood Partnerships, expresses gratitude to the Sikh community for inviting the federal office to be a part of the 10-year-anniversary commemoration, Thursday, Aug. 4, 2022, in Oak Creek, Wisconsin. Photo by Silma Suba

In the decade since the Oak Creek shooting, hate crimes against places of worship have been on the rise. Between 2018 and February 2020, mass shootings caused by religious hate increased by 17%.

As attacks have increased, synagogues, churches, mosques, gurdwaras and other places of worship have increased surveillance and security at their doors.

“We’ve developed an usher and greeters’ program where volunteers, who are not security people, but an extra set of eyes and ears, are trained to interact with the people as they come in, in a friendly manner,” Friedman said. The volunteers, he said, look out for nonverbal cues and other indicators to gauge if there is any need for concern.

In addition to securing their gates, the faith leaders said it’s important to include their congregations in conversations about safety and security.

Lanier said he uses biblical references to emphasize the importance of protecting oneself from harm.

“There’s a New Testament narrative where Jesus raised Lazarus from the dead,” Lanier told the gathering. “Some religious leaders were mad … and they said we’re going to move off. We’re not going to put ourselves in the way of danger. But we’re going to use wisdom in this moment, and pull ourselves back. It was really important to frame up for the congregation that this is biblical, this is within the wheelhouse of our faith.”

Not every place of worship can afford to hire security, and, the Milwaukee Islamic Center’s Quereshi noted, in some cases it’s even illegal to do so. Quereshi added that many faith leaders face the challenge of balancing a fundamental belief that places of worship should welcome everyone with an urgent need to protect themselves and their community.

Lanier said it’s important for people to look out for not just their own but other communities as well. “It’s like being in a neighborhood. It can’t be that I’m just going to look out for my house and not worry about what’s happening at your house … let’s get together like this evening so that we can share resources, information, best practices, collaborate and have a narrative and have a critical mass of people who are on the same page and sharing similar messages.”

Kaleka, whose father was one of the seven victims at Oak Creek a decade ago, said one of the lessons the Sikh community learned that day was how everyone can keep moving forward with compassion while also learning to fortify their walls.

“In all communities who are targeted, we have been blessed to be surrounded by love, by compassion, by kindness,” Kaleka told the audience. “We could have left whatever happened as whatever happened, but you all made the conscious choice of being here because of seven people who died, but you would not let hope die. And we’re here 10 years later, simply because of that.”

A version of this article originally appeared on Interfaith America magazine.

Separation of coven and state? Journalists should ask religion questions in this Las Vegas case — GetReligion

New podcast looks at sacred and profane in the Gospels

Are You Getting Enough Vitamin D?

5 Plus Size Halloween Costume Tips from Plus Size Cosplayers